All About Industrial Lubricants and Grease

Posted by TWP on April 7, 2021 12:38 pm | Comments Off on All About Industrial Lubricants and Grease 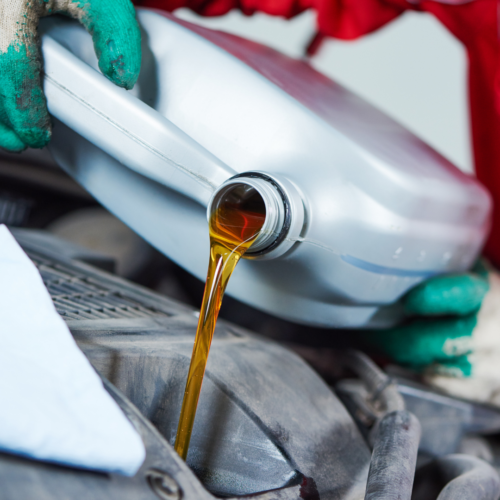 New to industrial lubricants and grease? Consider this.

According to Thomas Net:

“Lubricants are substances applied to reduce friction and wear on surfaces that have relative motion between them. Although this is a lubricant’s primary function, it can also serve as a heat-transfer agent, a corrosion preventative, a sealing agent, and as a means of trapping and expelling contaminants in mechanical systems. While oils and greases are common forms of liquid and semisolid lubricants, they can be found in other forms as well: dry lubricants, gas lubricants (such as air), etc. Specifying lubricants for mechanical systems must take into consideration not only the need to reduce friction and wear but also the need for them to perform some or all of these secondary functions. Equipment manufacturers endeavor to find optimum formulations for their designs and equipment operators are advised to follow manufacturers’ recommendations for their selection and use.

Types of Industrial Lubricants and Grease

“Liquid lubricants are largely produced from petroleum and synthetic fluids. The abundance of petroleum makes its use in petroleum-based oils ubiquitous and economical. Synthetic oils are generally more costly but are used in applications where their improved performance characteristics make the cost tradeoffs worthwhile.

“Among the many characteristics of liquid lubricants, viscosity is a dominant factor. Viscosity is defined as dynamic, or absolute, viscosity, in units of lb-sec/ft2. It is described as the measure of the velocity gradient between stationary and moving parts of a fluid. Kinematic viscosity, v, is defined as dynamic viscosity, or µ, divided by density, ρ, with units of ft2/sec. Kinematic viscosity is also expressed as SSU (or SUS), for Saybolt Seconds Universal, which assigns a number to a lubricant after running it through a capillary-type viscometer under Newtonian flow conditions. A common unit of dynamic velocity in the cgs system is the centipoise. Viscosity can be affected by temperature, shear, and high pressure.

“Other attributes of lubricating oils include their flash and fire points, their propensity to foam when used in high-speed rotating applications such as turbines and crankcases, and their ability to withstand high-pressure when used in hypoid gearing and other extreme-pressure situations. A special group of lubricants, dubbed EP lubricants, (for extended pressure), are specifically formulated to inhibit the wear that might result when highly-loaded gears make metal-to-metal contact.

“As noted above, high pressure has an effect on viscosity, tending to increase it as pressures reach higher regions. Designers of highly-loaded machines use this fact and are able to specify relatively low-viscosity fluids that might be unsuitable for use in lower-pressure applications.

“Synthetic oils are formulated generally to increase one characteristic—high VI or thermal stability, for instance—albeit often at the expense of another characteristic such as pour point. Synthetic oils tend to be costlier than mineral-based lubricants and hence are employed in industrial settings only when the performance gains warrant the added expense, as in instruments and heat-transfer systems such as industrial ovens. Synthetics are made from a variety of fluids such as polyglycol for brake fluid, phosphate esters for fire-resistant hydraulic fluid, silicones for use with rubber and plastic, etc.

“The oil used in engines performs many functions besides lubrication: corrosion prevention, cooling, sealing, etc. Engine oil manufactures compound these products with a host of additives, including detergents, VI improvers, EP enhancers, pour-point depressors, and so forth to meet the many functions that engine oils serve.

“You can you the Thomas’ Supplier Discover Platform to find Suppliers of Liquid Lubricants.

“Solid lubricants, sometimes called dry-film lubricants, are chiefly forms of synthetic or natural graphite or molybdenum disulfide, applied loosely to sliding surfaces or mixed with binders. They are used mainly where temperature or pressure extremes or environmental conditions make liquid lubricants impractical. High-vacuum environments are one such setting, where molybdenum disulfide is preferred. Graphite needs the presence of water vapor to act as a lubricant, making it unsuitable for use under vacuum conditions.

“Both graphite and molybdenum disulfide achieve their low coefficients of friction due to the laminar, plate-like structure of their molecules and the relatively weak structure between plates. Some liken their effect as similar to trying to cross a room on which playing cards have been spread over the floor: the individual cards slide easily past each other, minimizing friction between foot and floor.

“Polytetrafluoroethylene (PTFE), another anti-friction material, does not share the same layered structure of graphite and molybdenum disulfide. It is used as an additive in oils and grease and some lubricating sprays. It can be applied as an anti-friction coating or film to a variety of machine parts including compressor pistons, slides, O-rings, etc. It is sometimes combined with aluminum for hard- coat anodizing.

“Solid lubricants can be applied as unbonded powders or granules or mixed with organic or inorganic binders to create curable coatings on friction surfaces. Molybdenum disulfide is sometimes vapor deposited onto compression fittings where it serves as an anti-seize agent.

“Grease is composed of liquid lubricant and a thickener, usually soap, in addition to additives which impart desirable properties to the formulation such as corrosion resistance and tackiness. Normally a semisolid, grease liquifies at a temperature referred to as the dropping point, which can range from 200 to 500°F and higher depending on the thickening agent. Greases thickened with calcium- or lime-soaps tend to have dropping points in the lower ranges while those thickened with clays liquify at temperatures quite a bit higher.

“The NLGI (National Lubricating Grease Institute) rates the consistency of greases from a semifluid (000) to very hard (5) and block type (6) based on penetration tests of the material in a worked state, whereby a standardized object is dropped into the product at a known temperature and time and the depth to which the object sinks is noted. As a point of reference, most grease-lubricated rolling-element bearings use an NLGI 2 grade.

“The consistency rating is not the equivalent of oil viscosity, however. This rating is determined by the viscosity of the base lubricant. Most grease manufactures will publish this data. Greases with identical NLGI ratings can have different performance characteristics. Again, as a point of reference, many grease-lubricated rolling-element bearings will use grease with viscosities similar to SAE 20 or 30 oil. As with oils, grease may be modified with EP agents to protect against damage to precision surfaces from shock loading, severe loads, static loading, or frequent starts/stops. Use of EP agents is recommended only when needed as they can be detrimental to bearing surfaces and the like, especially at elevated temperatures.

“Aluminum complex grease is used where high temperatures are expected. With a dropping point of 500°F and a maximum useable temperature of 250-325°F, this smooth grease is often used in food machinery.

“Modified Bentonite clay is used when exposure to very high temperatures is expected. This smooth grease, with a dropping point of 600°F, a maximum useable temperature of 250-325°F, and excellent water resistance, is popular for use in ovens as it has the ability to create its own seal, a plus where bearing seals are exposed to those high temperatures.

“Calcium12 hydroxy stearate is a smooth grease with very good water resistance, albeit lower maximum useable temperature than other greases (250°F) and a dropping point of 290°F.

“Lithium 12 hydroxy stearate is a popular grease for many bearing applications, with good water resistance, smooth texture, a dropping point of 380°F, a maximum useable temperature of 250-325°F, and a capability for long life. It is a very pumpable grease.

“Hydrodynamic lubrication relies on pressure developed in the lubricating fluid to support the bearing load. For hydrodynamic conditions to exist, there is necessarily a balance that must be achieved between speed, load, and viscosity. These conditions can be met over a fairly broad range. However, high loads, starting and stopping, etc., can all act to disrupt this balance, causing irregularities in the surfaces to come into contact. This so-called boundary-lubrication condition is the reason that soft metals are used in babbitted journal bearings so that the babbitt becomes a sacrificial surface rather than the harder shaft journal. It is the same reason that EP lubricants are used in certain gear applications as additives in the lubricant provide a cushion of sorts during these boundary-lubrication events. So-called µn/P, or Stribeck curves, plot coefficient of friction, f, against the nondimensional group µn/P (viscosity x speed/pressure) for shafts in lubricated journal bearings. As the shaft comes up to speed, the plot moves through zones of boundary lubrication to mixed lubrication to hydrodynamic lubrication.

“When selecting anti-friction metals such as tin- and lead-base babbitts, bronze, copper-lead, and even cast iron, as well as the various forms of sintered bearings, considering the running material (shaft, way, etc.) is equally important. For instance, soft steel will run well in babbitt, cast iron, or soft brass, but not in soft steel or bronze. Hardened steel will run well in soft bronze and many other metals, but not in hardened heat-treated bronze.
Hardened nickel-steel runs poorly in hardened nickel-steel.

“Rolling element bearings have high loads in the contact zones which tends to deform the elements. There is, theoretically, a thin film of lubricant that exists between the rolling elements and the races, known as elastohydrodynamic, or EHD, film.

Handling and Storage
“Oil is commonly shipped in 55-gallon drums and 5-gallon pails, and grease is often supplied in 35 lb. kegs. Oil is also supplied in bulk and stored in tanks. Most lubricants have shelf lives which are often determined by the additives in them. A good practice is to use the oldest stock first. In general, a room that is clean, dry, and free from temperature swings provides the best storage conditions for maximizing shelf life. Drums that are stored outdoors should be positioned on their sides and protected by tarps or shelters.

“During handling, drums may be rolled on their sides but should never be dropped. Drum-handling jaws for forklifts are available that surround the drum perimeters; forklift blades alone should not be used to grasp drum sides.

“It has been shown that oil cleanliness can have an impact on equipment life. The International Standards Organization (ISO) rates oil cleanliness by particles per milliliter based on the number of particles and their sizes. Even new oil can have particle counts higher than would be recommended for some machines, and filtering oil before use can be beneficial for equipment life. Likewise, careful handling of lubricants to avoid mixing different formulations and introducing contaminants is an important part of any lubrication program. Grease should also be carefully controlled to avoid mixing formulations.

“Used lubricants should be recovered or disposed of in accordance with sound environmental practices.”