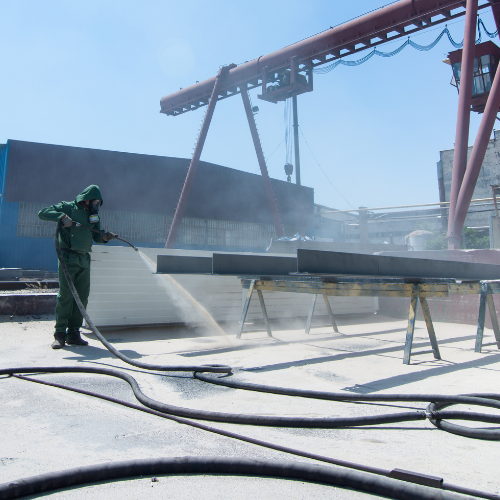 How do you clean metal?

According to Corrosion Doctors:

Preparation for processing it for application 0f a non-metallic zinc phosphate for either corrosion protection or painting
In metal cleaning it is generally overlooked that water plays the most important part. Its condition (hard or soft), and degrees thereof determines the performance of the chemicals dissolved in it. The efficiency of any cleaner is directly proportional to how if performs in water. The chemical must do three important things. First, it must tie-up or inactivate hard water ions for better rinsing and cleaning. Second, it must lower the surface tension of the water— in effect, it makes water wetter. Third, it must ionize or dissociate when it is added to water.

An ion is an electrically charged chemical particle in solution. And in all acids and also in water the electrically charged particle is the Hydrogen ion. It is this ion that has such a pronounced effect on the activity or strength of an acid. The counterpart of this ion in an alkaline water solution is the Hydroxyl ion, the degree of presence which determines the alkalinity of the solution.

Oxygen is the one chemical ion which is present in all alkalies, acids, water, and in air, and it is needed to maintain the chemical reaction known as oxidation. Two examples of this are: the rusting of iron or steel, and the white corrosion products on zinc plated surfaces. Also, Oxygen is the cause of breakdown or decomposition of certain chemical products .

Although all acids and alkalies have an effect on all metals to varying degrees, some react so minutely that physical evidence is not observable. In the extreme cases. the reaction is violent, manifested in the form of boiling and gassing at the metal surface, which is a sign of a pronounced attack on the metal. In effect, the metal is being dissolved. Generally, strong alkalies have the most drastic effect on aluminum and zinc, while strong acids more particularly attack steel. Strong oxidizing acids such as Nitric and Chromic readily attack copper alloys.

Metal cleaning is decidedly affected by the type and degree of attack a particular chemical has on a given metal. Also of importance on the clean-ability of a chemical compound is the hardness of the water. That is, in the amount of calcium and magnesium dissolved, and the wetting ability.

Other factors having•a significant and influencing effect on the cleaning ability of a chemical compound are, namely:

CONCENTRATION – of the chemical determines reaction time, speeding up removal of the soils and oils and greases from the surface by the simple reason that it brings fresh solution into contact with the contaminants, and the physical action itself helps to dislodge the materials clinging to the surface.

Remember, the above four factors are the most important ones to be learned, because all metal cleaning situations can be related back to one or all of them. If properly applied, these four factors will enable you to perform all your cleaning with a minimum of problems.