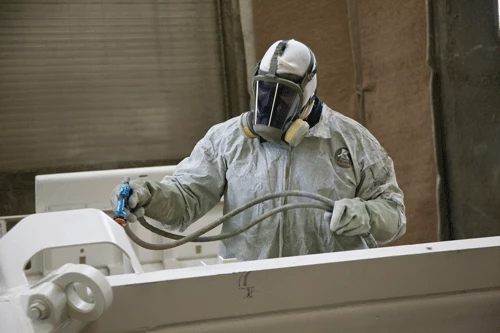 One of Beth Ann Pearson’s tasks as national product line manager for military coatings at Sherwin-Williams’ Product Finishes Division may be the most daunting of her career.

The company was awarded a $1.4 million research grant by the Department of Defense in June 2012 to develop a zero-volatile organic compound (VOC), zero-hazardous air pollutant (HAP) exterior topcoat to replace the military’s current generation of liquid-applied chemical agent resistant coatings (CARCs) by 2015.

“It’s a very challenging project,” says Pearson, a chemist by training who joined Sherwin-Williams in 2010 with almost two decades of experience in the coatings industry.

It’s also an extremely important project for the U.S. military as it seeks to protect service personnel from chemical attacks, as well as a game-changer for the U.S. powder coating industry.

“We are extremely interested in utilizing powder coating for a CARC application,” says Adam Goldstein, vice president of Consolidated Coating in Bellingham, Mass., which specializes in coating a variety of plastic and metal substrates, including military components. “Our company is constantly looking for innovation and new technologies that will simultaneously reduce our VOC emissions, while also increasing our production efficiency. A move to a powder coat CARC would fit both of these categories.”

Pearson’s research team knows that it must match coating durability with safety of troops.

“Far and above everything else, the most important asset that we need to protect is that of our armed forces personnel in the field of battle,” Pearson says. “We—as is the entire coatings industry—are being challenged to consistently improve CARC coatings capabilities.”

Military regulations require all tactical equipment, including ground support equipment, tactical wheeled vehicles and aircraft, to be hardened against the effects of both chemical warfare agents, and degradation caused by the cleaning and decontamination procedures necessary in the aftermath of a chemical attack. These regulations also are followed by the Marine Corps and apply to Air Force vehicles and equipment procured through the Army.

With the U.S. EPA breathing down its back, the DoD is under the gun to get more environmentally friendly coatings into its system. Current liquid-applied CARC topcoats supplied by coatings vendors emit about 5.2 million lbs per year of VOCs and HAPs.