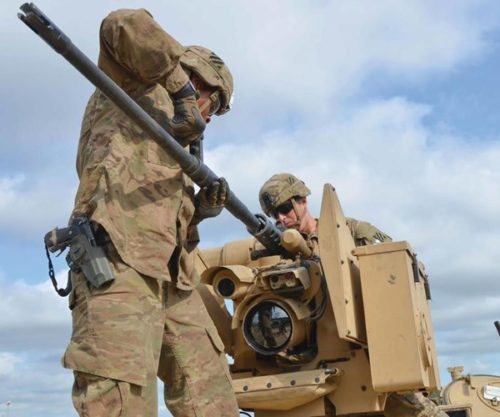 When it comes to protecting warfighters from exposure to chemical agents that have contaminated combat vehicles, determining how much agent gets absorbed into the material matters. That’s what researchers at ECBC discovered and helped the Army fix.

The U.S. Army uses over a million gallons of coating a year on its combat vehicles. One of the key jobs of a coating—in addition to providing corrosion resistance and camouflage—

is protecting its occupants from chemical agent exposure.

The key to this protection is to make sure vapor and contact hazards do not linger after soldiers and maintenance personnel believe they have decontaminated a vehicle. What the Army needs is a coating that resists chemical agent absorption in the first place, so that there is no agent left to resurface after decontamination efforts are completed.

Flaws in the Existing Method

For decades, the method for determining the chemical agent resistance of a coating was to place a known amount of chemical agent on a coating sample under engineering-controlled laboratory conditions, wash it with isopropyl alcohol, then measure how much agent vapor re-emitted from the exposed material in the air above it after 22 hours. However, ECBC researchers who specialize in material decontamination have learned that some coating materials can absorb agent and then re-emit it slowly over a much longer period of time.

By reviewing the Army’s current chemical agent resistance method, ECBC researchers determined that the vapor collection accounted for only 43 percent of the agent actually in the coating sample. The remaining 57 percent was still trapped in the material and would continue to come out long after the 22-hour measurement window. The researchers recognized this as a significant flaw and notified the vehicle coatings commodity area manager, John Escarsega at the U.S. Army Research Laboratory.

“The commodity area manager realized right away that he was relying on a broken metric and was eager for our help in creating an accurate method for measuring agent resistance and retention,” says Brent Mantooth, Ph.D., a lead researcher at ECBC. “The Army was so concerned, that developing a new agent resistance evaluation method became one of the Defense Threat Reduction Agency’s top 15 programs for 2015.”