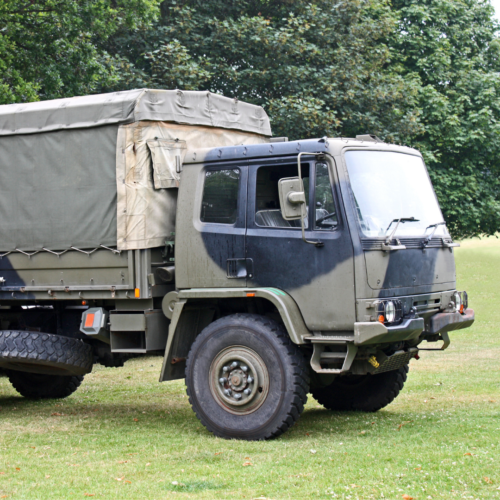 New to CARC? Consider this.

According to Military Trader:

“Chemical Agent Resistant Coating or CARC is, in simple terms, a low gloss military version of the polyurethane paints that were developed for use in commercial industry. CARC has a low porosity that prevents chemical warfare agents from “soaking in” to the finish and makes decontamination easy to perform. TB 43-0242 states, “[Chemical agents] just bead up on the surface like water on a newly waxed car.” More importantly, the CARC finish is not affected by the solvents used in the decontamination process.

“The finish is also much more durable and resistant to fading, lasting up to four times longer than the alkyd paint previously used by the Army. This durability promised to keep fielded vehicles looking better for a longer period of time and to reduce the number of times a vehicle would need to be repainted in its life cycle, thus reducing maintenance costs. The resistance to solvents allows regular washing of vehicles without fear of damaging the finish.

“To provide some idea about the durability of the CARC finish, TB 43-0242 gives the following as a test to determine if a vehicle is painted with CARC, “wet a cloth with acetone and rub hard on the painted surface for 10 seconds. Wet a clean corner of the cloth with acetone and rub another 10 seconds if no paint comes off the second time, it’s CARC.”

BACKGROUND OF CARC
“The first chemical agent resistant coatings were developed as early as 1974, and by 1983 the Army was ready to make CARC the required coating for all combat, combat support, tactical wheeled vehicles, aircraft and tactical ground support equipment. The US Army officially adopted CARC in May of 1983.

“Besides its chemical resistance and durability, CARC has some other unique properties. For example, the base green color, “Green 383.” uses pigments that mimic the reflective properties of chlorophyll which is found in living plants, making the vehicle harder to detect using infrared detectors. During the Gulf War, “Tan 686” was reformulated to reduce the amount of solar heat absorption and keep vehicles cooler in the desert environment. The new color became “Tan 686A” and was standardized in the latter stages of the conflict.

“To create these special pigments, CARC is a two-part coating that is mixed before application. The components are not interchangeable, it is not possible to mix component A of one color with component B of another color, and intermixing components from different manufacturers is also not feasible. Once mixed, unused CARC will not keep and must be disposed of as a hazardous material. CARC is also highly flammable and it is recommended that the cans and mixing equipment be grounded when mixing the paint. A one part CARC was also made available for brush or roller touchup at the unit level.

CARC HEALTH CONCERNS
“One problem of CARC is the toxicity of its components. Polyurethane paints were in use in the commercial and automotive industries for some years before the Army adopted CARC, so the health risks associated with them were well documented. All polyurethane paints contain isocyanates, and this alone poses a significant health risk. Add to this the array of volatile solvents and cleaners needed and you have a recipe for serious health risks.

“Hexamethylene diisocyanate (HDI) is the isocyanate found in CARC. It can be released when CARC is being sprayed, and it is also released when CARC burns making the smoke from welding and vehicle fires a greater potential health hazard. HDI is also a known sensitizer for asthmatics; soldiers with asthma were not to be involved with the application of CARC as “a severe life threatening allergic reaction may occur.”

“CARC poses no known health risks once dry unless disturbed by sanding or grinding. As a result of the hazards involved with applying CARC, individual units and crews were no longer responsible for the painting of vehicles. Complete repaints had to be done at the direct support, general support or depot level, provided the facility had an OSHA approved paint booth.

“This rule also applied to complete repaints of non-CARC painted equipment as the Army strove to become compliant with ever more stringent environmental regulations. Moving the responsibility for major painting tasks to the maintenance level also served to improve the quality of the paint finish and help maintain greater uniformity in camouflage patterns.

“The October 1990 version of TB 43-209 is the source for CARC patterns for several military vehicles.

“Soldiers at the unit level were limited to touching up their vehicles using a brush or roller; they were not supposed to spray CARC for any reason. Touch ups for cosmetic reasons were also officially prohibited; only blemishes in the paint that went to bare metal were to be retouched, to inhibit corrosion. Unit level touch up was only supposed to be performed using the one part CARC. Rules governing CARC application were spelled out in AR 750-1, paragraph 4-41.

“It was determined that brush or roller application of CARC could be done outdoors without needing a respirator, as long as the individual was exposed to no more than one quart each day. It was, however, required that the individual wear chemical goggles, NBC gloves, a hat, and long sleeves. Use of the M40 NBC mask was permitted at the commander’s discretion.

“As with any army, rules are not always followed. The U.S. Army provides a good barometer in its PS Magazine. According to PS Magazines online article index, from 1990-2000, there were 22 articles on CARC, 8 of which were about CARC touch up and what painting was allowed at the unit level. It would appear that many soldiers were unfamiliar with AR 750-1!

THE CHANGEOVER TO CARC

“When the Army adopted CARC in 1983, it issued a set of guidelines on how the transition from alkyd to CARC was to transpire. The transition began in October 1985 (start of Fiscal Year 1986) for systems already in the field. The guidelines were as follows:

1. At the unit level, crews were to continue touching up the existing paint jobs until such a time as the whole vehicle was in need of a repaint, complete repaints were to be done only as needed.
2. Any vehicle in a depot level repair program would be repainted using CARC and the 3-color scheme.
3. If an approved 3-color CARC pattern was not available for the vehicle, the Green 383 base color was to be applied.
4. Vehicles painted in CARC were to be marked near the data plate with “CARC mo/yr.”

“It was spelled out that any new systems in procurement as of the May 1983 message would be procured with CARC in the 3-color patterns. Systems already in production would convert to CARC as soon as possible, but no later than October 1985.

“Some fielded systems that were near the end of their life cycles were left in the old 4-color alkyd patterns until they left service. By the onset of the Gulf War in 1991, most everything was CARC painted, but the occasional piece of support equipment could be found in the old pattern into the 1990’s. Once a piece of equipment was painted in CARC, all markings were to be applied using CARC or lusterless black pressure sensitive decals.

a.) Painted items that attain surface temperatures of 400 degrees Fahrenheit serve a heat-conducting function or serve a function of expanding and contracting during operation. Examples are manifolds, turbo chargers, cooling fins, and rubber hoses.
b.) Displacement watercraft that will be subject to prolonged salt-water immersion. Examples are the logistical support vessel and the landing craft utility.
c.) Non-deployable equipment and fixed installation systems. Examples are railroad rolling stock and fixed power generation systems.
d.) Installation / TDA equipment such as military police cars, non-tactical fire trucks and buses.
e.) Aluminum transmissions that are enclosed in combat vehicle powerpack compartments. However any ferrous components of the transmission must be protected with CARC or other rust-preventative agents.

“AR 750-1, paragraph 14-4, also spelled out, “If items do not require painting, do not paint them. For example, items made of fabric or which have anodized or parkerized surfaces are not painted.”

“The old practice of continuing camouflage pattern painting onto vehicle soft-tops was also ended, as there was no flex agent available to mix with CARC paints.

CARC ON WOOD
“It was found that CARC did not last well on wood. Wood expands and contracts with weather changes and CARC lacked the flexibility needed move with the wood, so cracks would form and the finish would begin to peel. It was recommended in TM 43-0139, “Properly seasoned wood shall be sealed prior to application of CARC with a polyurethane sealer …wood shall be treated…dried to a moisture content no greater than 20% and pressure treated in accordance with [the] American Wood Preservers Bureau…” At some point in the 1990s, it was decided that CARC was not to be used on wood at all because it simply did not last.

THE FUTURE OF CARC
“Given the volatile and toxic nature of the CARC coatings, research to develop more environmentally friendly coatings with the same properties as CARC were underway even before CARC became standardized. CARC has a Volatile Organic Compound (VOC) content of 420 g/L. This was pushing the limits of federal and local regulations stemming from the Clean Air Act of 1990.

“The Army, as well as the private sector, began experimenting with waterborne coatings in an effort to meet the requirements of new clean air regulations. By the close the century the US Army Research Laboratory had developed a coating that had a VOC content of 220g/L while exhibiting many of the same characteristics of CARC. Development and testing continued as the century drew to a close.”