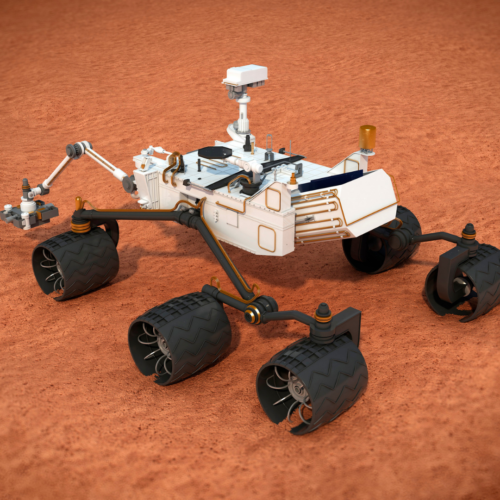 Ever wondered how rovers can survive the harsh environments of space? Liquid coating.

According to Products Finishing Online:

“NASA’s Mars 2020 mission successfully launched on July 30 and is currently on its way to the red planet. Known as Perseverance, the Mars rover’s mission is to search for signs of ancient life and cache rock and soil samples for possible return to Earth.

“To protect Perseverance, a special paint job is needed. Chris Salvo of NASA’s Jet Propulstion Laboratory (JPL) who manages the team who puts together the rover’s mechanical subsystem, explains the role the paint job plays in standing up to the extreme temperatures of space travel and the harsh environment of the red planet. A special reflective white paint is used to reflect sunlight and prior to painting, the aluminum surfaces of the rover chassis are scuffed and carefully cleaned to ensure the paint adheres correctly. Detailed masking is required to make sure areas requiring paint are coated precisely and operational surfaces are left unimpeded.

“’This very special formulation of paint has to live through all the difficulties of getting to Mars, shaking on the launch vehicle, as well as existing on the surface of Mars in the hot and cold cycles,’ Salvo says in a video released by JPL.

“Once painted, the rover’s chassis is then baked in a thermal vacuum chamber to remove any volatile materials such as water particles that might be drawn out of the paint by the vacuum of space and cause problems.

“Curtiss-Wright Surface Technologies has a long standing relationship with NASA. Microseal was selected for the Perseverance mission because of its friction reduction properties under a wide range of temperatures from cryogenic temperatures to over 1,000° F, and its ability to perform in hard vacuum conditions.

“The Microseal process creates an ultra-thin adherent film that fills voids on the surface of components. The film is designed to perform within a vacuum and in extreme temperatures ranging from -423°F to 2000°F (-253°C to 1093°C). The company says the process creates a continuous lubricating surface that reduces friction and prevents galling and seizing. It also dissipates heat, remains stable under extreme environmental conditions, and does not attract contaminant particles.

“’Regardless of the surface geometry of the treated part, once the coating reaches a thickness of fifty to eighty millionths of an inch, no further coating will be accepted,’ explains Cleary, ‘Coverage is uniform on all surfaces the air tool can reach, and the process is burnishable to original dimensions, eliminating the need for special machining or tolerance allowance.’

“Due to the complex and proprietary nature of the equipment, Microseal application takes place at one of Curtiss-Wright Surface Technologies’ worldwide facilities. The company inspects incoming parts for cleanliness and freedom from surface defects and closely monitors the entire application process.

“The latest Mars rover mission includes numerous new technologies including a robotic helicopter that will mark humanity’s first attempt at flight in an alien atmosphere. Perseverance is scheduled to arrive on the red planet on February 18, 2021.”