Chemical Agent Resistant Coating is a paint commonly applied to military vehicles to provide protection against chemical and biological weapons.The surface of the paint is engineered to be easily decontaminated after exposure to chemical warfare and biological warfare agents. The paint is also resistant to damage and removal by decontaminating solutions. Two-component systems (e.g. epoxy or polyester-based) are often employed. This coating is described in MIL-DTL-53072E.

As of 2018, the U.S. Army Research Laboratory (ARL) led research and development activity for CARC and was the approving authority of CARC products for the Department of Defense (DoD).

Since 1985, U.S. Army Regulation 750-1 mandated the use of CARC systems on all tactical equipment. Regulations mandated the hardening of equipment (i.e. ground support equipment, tactical wheeled vehicles, and aircraft) against the impacts of chemical attacks and subsequent cleaning agents following contamination. These same regulations were followed by the Marine Corps and Air Force.

As of 1985, most military vehicles and equipment have a topcoat applied with camouflaged CARCs. These topcoats produced a non-porous finish that acted as a protectant against radioactive, biological and chemical contamination. CARC repelled chemical by preventing absorption, with chemicals beading up on the finish surface where they could be washed away.

Solvent-borne CARCs were developed in the early 1980s. The impetus for CARC development was the need to protect costly military equipment. Operation Desert Storm further increased concern of the potential for chemical attacks.

The impetus for improved CARC formulations was to reduce the cost of material degradation for the DoD. An improved topcoat was composed to have 44% primary pigments and inorganic extenders, 24% resins, 30% solvent, and 2% additives. Formulations changed from inorganic to polymeric-based extenders in to enhance the protective features of the topcoat and reduce the cost of material degradation. Additionally, air pollution regulations required reformulation of the coating’s solvent content to reduce the emission of hazardous air pollutants.

Request a QuoteView All Of Our ServicesBack to Military CARC Coatings 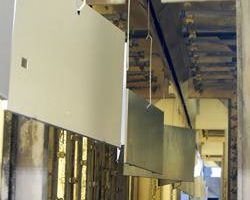 Complete coverage of powder coating is always a worthwhile goal, both in terms of application and knowledge about the subject. More metal fabricators are finding themselves in a position where they are expected to take on responsibility for finishing metal parts. Either OEM customers want them to take on powder coating activities, or at the […]

Q: We struggle to avoid light coating in some areas of our parts. Our application is all manual so we have focused on working with operators to help them understand the critical areas and work harder at getting enough powder in the inside corners and tight spaces, but they still have some failures. We also […]

You’ve probably seen plenty of Army vehicles on the road. They might be standard olive drab, or possibly a desert camouflage pattern. However they’re painted, the basic material for the coating is called CARC, Chemical Agent Resistant Coating. “Our Nato customers, our allies, they are all using this. This paint is in theater,” said Pam […] 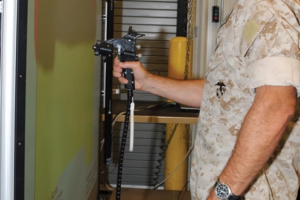 The Yermo Annex Marine Corps. Logistics Base in California and the Corpus Christi Army Depot Aviation Center in Texas have acquired new systems to help train and enhance employees’ painting abilities. The bases obtained a Spray Technique Analysis and Research for Defense (STAR4D) training program from the University of Northern Iowa, a virtual training that […]