Pretreatment is often comprised of multiple tasks before products are finished

The salt spray (or salt fog) test is a standardized and popular corrosion test method, used to check corrosion resistance of materials and surface coatings. Usually, the materials to be tested are metallic (although stone, ceramics, and polymers may also be tested) and finished with a surface coating which is intended to provide a degree of corrosion protection to the underlying metal. Salt spray testing is an accelerated corrosion test that produces a corrosive attack to coated samples in order to evaluate (mostly comparatively) the suitability of the coating for use as a protective finish. The appearance of corrosion products (rust or other oxides) is evaluated after a pre-determined period of time. Test duration depends on the corrosion resistance of the coating; generally, the more corrosion resistant the coating is, the longer the period of testing before the appearance of corrosion/ rust. The salt spray test is one of the most widespread and long-established corrosion tests. ASTM B117 was the first internationally recognized salt spray standard, originally published in 1939. Other important relevant standards are ISO9227, JIS Z 2371 and ASTM G85.

Salt spray testing is popular because it is relatively inexpensive, quick, well standardized, and reasonably repeatable. Although there may be a weak correlation between the duration in salt spray test and the expected life of a coating in certain coatings such as hot-dip galvanized steel, this test has gained worldwide popularity due to low cost and quick results. Most Salt Spray Chambers today are being used NOT to predict the corrosion resistance of a coating, but to maintain coating processes such as pre-treatment and painting, electroplating, galvanizing, and the like, on a comparative basis. For example, pre-treated + painted components must pass 96 hours Neutral Salt Spray, to be accepted for production. Failure to meet this requirement implies instability in the chemical process of the pre-treatment, or the paint quality, which must be addressed immediately so that the upcoming batches are of the desired quality. The longer the accelerated corrosion test, the longer the process remains out of control, and larger is the loss in the form of non-conforming batches. The principal application of the salt spray test is, therefore, enabling quick comparisons to be made between actual and expected corrosion resistance. Most commonly, the time taken for oxides to appear on the samples under test is compared to expectations, to determine whether the test is passed or failed. For this reason, the salt spray test is most often deployed in a quality audit role, where, for example, it can be used to check the effectiveness of a production process, such as the surface coating of a metallic part. The salt spray test has little application in predicting how materials or surface coatings will resist corrosion in the real world, because it does not create, replicate or accelerate real-world corrosive conditions. Cyclic corrosion testing is better suited to this.

The apparatus for testing consists of a closed testing cabinet/chamber, where a salt water (5% NaCl) solution is atomized by means of spray nozzle(s) using pressurized air. This produces a corrosive environment of dense salt water fog (also referred to as a mist or spray) in the chamber, so that test samples exposed to this environment are subjected to severely corrosive conditions. Chamber volumes vary from supplier to supplier. If there is a minimum volume required by a particular salt spray test standard, this will be clearly stated and should be complied with. There is a general historical consensus that larger chambers can provide a more homogeneous testing environment.

Variations to the salt spray test solutions depend upon the materials to be tested. The most common test for steel based materials is the Neutral Salt Spray test (often abbreviated to NSS) which reflects the fact that this type of test solution is prepared to a neutral pH of 6.5 to 7.2. Results are represented generally as testing hours in NSS without appearance of corrosion products (e.g. 720 h in NSS according to ISO 9227). Synthetic seawater solutions are also commonly specified by some companies and standards. Other test solutions have other chemicals added including acetic acid (often abbreviated to ASS) and acetic acid with copper chloride (often abbreviated to CASS) each one chosen for the evaluation of decorative coatings, such as electroplated copper-nickel-chromium, electroplated copper-nickel or anodized aluminum. These acidified test solutions generally have a pH of 3.1 to 3.3

has evolved in recent years, largely within the automotive industry, as a way of accelerating real-world corrosion failures, under laboratory controlled conditions. As the name implies, the test comprises different climates which are cycled automatically so the samples under test undergo the same sort of changing environment that would be encountered in the natural world. The intention being to bring about the type of failure that might occur naturally, but more quickly i.e. accelerated. By doing this manufacturers and suppliers can predict, more accurately, the service life expectancy of their products.

Until the development of Cyclic Corrosion Testing, the traditional Salt spray test was virtually all that manufacturers could use for this purpose. However, this test was never intended for this purpose. Because the test conditions specified for salt spray testing are not typical of a naturally occurring environment, this type of test cannot be used as a reliable means of predicting the ‘real world’ service life expectancy for the samples under test. The sole purpose of the salt spray test is to compare and contrast results with previous experience to perform a quality audit. So, for example, a spray test can be used to ‘police’ a production process and forewarn of potential manufacturing problems or defects, which might affect corrosion resistance. .

To recreate these different environments within an environmental chamber requires much more flexible testing procedures than are available in a standard salt spray chamber.

The lack of correlation between results obtained from traditional salt spray testing and the ‘real world’ atmospheric corrosion of vehicles, left the automotive industry without a reliable test method for predicting the service life expectancy of their products. This was and remains of particular concern in an industry where anti-corrosion warranties have been gradually increasing and now run to several years for new vehicles.

With ever increasing consumer pressure for improved vehicle corrosion resistance and a few ‘high profile’ corrosion failures amongst some vehicle manufactures – with disastrous commercial consequences, the automotive industry recognized the need for a different type of corrosion test.

Such a test would need to simulate the types of conditions a vehicle might encounter naturally, but recreate and accelerate these conditions, with good repeatability, within the convenience of the laboratory. CCT is effective for evaluating a variety of corrosion types, including galvanic corrosion and crevice corrosion.

Taking results gathered largely from ‘real world’ exposure sites, automotive companies, led originally by the Japanese automobile industry, developed their own Cyclic Corrosion Tests. These have evolved in different ways for different vehicle manufacturers, and such tests still remain largely industry specific, with no truly international CCT standard. However, they all generally require most of the following conditions to be created, in a repeating sequence or ‘cycle’, though not necessarily in the following order:

The above list is not exhaustive, since some automotive companies may also require other climates to be created in sequence as well, for example; sub-zero refrigeration, but it does list the most common requirements.

Request a QuoteView All Of Our ServicesBack to Pretreatment 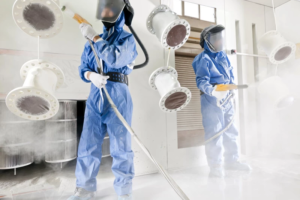 What is Powder Coating?

Powder coating is a dry finishing process that has become extremely popular since its introduction in North America over in the 1960s. Representing over 15% of the total industrial finishing market, powder is used on a wide array of products. More and more companies specify powder coatings for a high-quality, durable finish, allowing for maximized […] 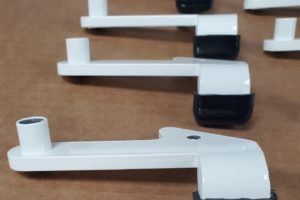 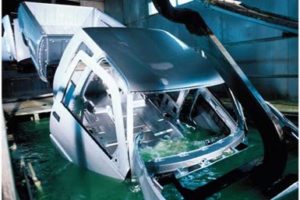 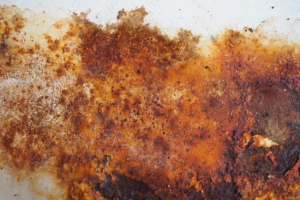 The hybridized matrix membrane developed in the study presents a unique design strategy for highly hydrophobic coatings showing great long-term corrosion resistance. Addressing the Corrosion Problem of Magnesium Alloy Thanks to their low weight, high specific strength, and recyclability, magnesium (Mg) alloys are employed across many industries, including the automotive and aeronautical sectors and electronic […]